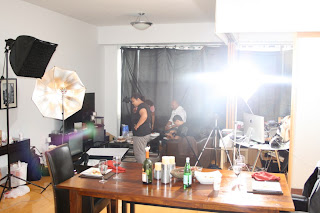 I woke up dragging just a little, but still excited to complete filming...today would be about dialogue and acting.  The entire day I am acutely aware of  "The Breakdown" scene.  By far I thought that would be the most challenging...I was sort of wrong.

I arrived on set in Brooklyn to find lots and lots of film equipment scattered all over, claiming possession of the area the way a dog marks its territory.  Immediately got my make up done, and then was given my wardrobe, or shall I say lack thereof.  Wow...this is new...hm. But if I'm gonna make this video work I wear what I'm told to wear...there's a reason for everything.  Everything on film is premediated - from the wardrobe to the scenery to the script...so the show must go on.  No one seemed to gawk in horror so after a few minutes I grew comfortable with my "morning after" look.  Waseem showed up, and all were present...the  set was ready to go..it was about noon when we finally began filming the scene and suddenly it went all dim...we had a problem  with lighthing which set the filming back a bit.  By the time we were getting warmed up into the scene, I had to leave. I had to go to WKTU to moderate a live online chat with Lisa Lisa and George Lamond to discuss Beatstock, KTU's biggest summer concert of the year! I felt so guilty that I had to leave, but work first...lol.  I left at 1:30pm.

I got to KTU and saw Lisa Lisa first. I love her so much. I remember when I was 17, I was working as a cashier in a drug store in the Bronx, Star Drug.  Whenever Lisa Lisa's Can You Feel The Beat came on, I stopped what I was doing and sang it in aisle 2 with a broom in my hand!  The song made me so happy..and here I am 25 years later, hanging out with her!!  She is as real as anyone can be - she's funny, down toearth and she tells it like it is...no excuses; no apologies!  George Lamond came shortly after and as usual he always makes me laugh. Moderating the online chat was just as comfortable as hanging out with them at a coffee shop.  I said my goodbyes and rushed back to the set about 3:40pm.

Back onset, Waseem, the actor playing my husband in the video, and I ran through our scene a couple of times and I was impressed with how natural his acting was.  There was no facade, no faking...he was himself.  His natural energy made filming the scenes so much easier...We got really into the scenes and after a while, I thought, "wow. this doesn't feel like work at all!  This is FUN! I could do this all day." In between takes, Waseem and I got to talking...He spoke about his childhood, his culture (he's from Pakistan) and I was loving the fact that although we come from different religious beliefs, we agreed on so many things. What was most impressive about Waseem (pronounced Vaseem) was how he spoke about his girlfriend!  Everytime he spoke about her, his face lit up!  He smiled everytime he talked about her, and talked about her from day 1.  Let's be honest, ladies, it's not everyday we hear a man brag about his woman.  He talked about how supportive she's been and I understand she was with him the day he came in to audition...she rehearsed lines with him....that is so aweseome!! Later on, I found myself wondering, "Why haven't I met someone who feels that way about me?  Where the hell is he? And then, I was brought back to reality very quickly when the director said, "Okay, people, we're now moving on to the bedroom scene!"

Huh?
The what??
Um, the what?
Inside I was screaming, Noooooo!!!  But I remained silent.  I calmed down when I told myself that it probably didn't incude me...that it was probably a scene just for Waseem. After all, he's the one with the great physique...Boy was I wrong...

I went into panic on overdrive!  I started freaking out internally.  I can't do this!!  No freaking way!  No one told me about this!  I felt oddly betrayed but at the same time, it presented a new challenge and I'd never been here in my life before.  I walked over to Waseem...

Hm, I thought...he's never had a Puerto Rican girlfriend, lol!  For the first time, I was glad I had no boyfriend to get angry with me for doing a sexy scene like this.  I wouldn't have to defend myself, and convince him that "it was nothing!"  But I was still freaking out!  Then I went there...to the ugly place..I;m going to look like a big fat whale!!  Oh, God!  Once again, I walked over to Waseem.

"You sure?"
"Yes...We're gonna do great...no worries."
Sure easy for you to say, Hercules..easy for you, you look like an actor in Spartacus!  And then I said something so stupid Istill cannot believe the words emerged from my mouth.
"You're not disguested by me?"
"No..of course not."
I did NOT feel assured.  Truth is I usually am pretty confident about my body, but not when it's so publicly done.

Next thing I know, I'm being propped up on pillows, under a sheet and in a bra...and there are like 15 people standing around.  I was in bed...I haven't been in bed like this...well let's just say it's been centuries...

Director:  "Okay, Waseem you're going to take your shirt off and lean over her."
Oh, Dear God...get me through this...This is CRAZY!!