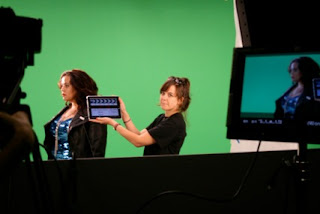 Woke up at 5:15am.  This is it!  Today's the day I've been waiting for, excited for, blogging about, concerned about..it...is...here!  Didn't sleep much- you already know how I am, lol.  But woke up SO happy! Showered, dressed, packed a bag with intimates. Wouldn't you know it.  Murphy's Law:  What can go wrong, will go wrong...Murphy's Law in full effect - got my...um, ok, that time of the month...and that meant a BIG zit on the side of my nose too!  As if the monthly visitor wasn't punishment enough!

Anyway, my friend, Brenda, who doubled as my personal assistant (she's been personally assisting me, to be honest with you, for YEARS- not to mention she's my bestest friend in the whole entire universe!!), met me at my house and we got into the limo (Thank you, Sophisticated Limousines!).  She was excited for me, and I couldn't think of a better person to have been with me in the limo (well only one, David, lol).  We arrived at Bravo Studios, on 27th street, which is a green screen studio...I'll explain what that means in a future blog.  As soon as I got out of the limo, the filming of the documentary began.  God, it was exciting!  I got upstairs and there was such a buzz about the entire floor:  people running in all sorts of directions; the entire film crew wearing "Judy Torres - Stay T-shirts.  There was a spread in the main room - food was outrageously cool!  (Thank you, Tuscany Deli -yes, another shameless plug, but you have to thank people..it's the right thing to do!)  Brenda immediately brought me coffee & a bagel, and I was thinking, "ok, chica...you don't have to go THAT crazy!  I can get my own bagel and coffee, lol!"  I sat down, and as I began to eat breakfast, the director, David Miskin, (who is also my bestest bestest friend in the whole entire universe!! Yes, you can have more than one!) called a production meeting and gave out directions as to how the day would go.  As I had a big bite of bagel in mouth, I thought to myself, "this is so freaking cool! Look at everyone!"

Production meeting over...time to get my hair and make up done...time to be primped, pushed up, dolled up and diva'ed out! I walked into the wardrobe/makeup room and there was Javier Rosa, make up artist extraordinaire, makeup artist to the stars, including Tyra Banks!  "Girl, we are going to get you glamified!!!"  In an instant, I am smiling, forgetting about whatever flaws I had in that one instant!  And then, as beautiful as can be, there was a HUGE bouquet of multi-colored roses from the director, associate director, Erik Spink and the producer, Terence Osbourne...with a card, wishing me luck!  I felt like a real star, I really did...I know you're thinking "Judy, you always are treated that way..." No ttrue.  This was a bit different!  Make up was being applied, and before I could even put on my first look in wardrobe, the director came in:  "Judy, the fans are here!"  ALREADY?!?!  Wow....and then...butterflies fluttered and danced in my gut, all the way down to my whoo-haaa!!  Oh, they're early?! Suddenly, there was Candace, from Lane Bryant, wishing me luck!  Wow...this is just too awesome to have so much support!!!

I began to think about everything.  I began to worry about everything...are the fans being taken care of?  Did Melissa Nikkita (from BIG Management) greet them? Is she with them?  Did everyone eat?  What are they going to ask of me today during this shoot?  What is Javier really thinking about my face?  Is Brenda comfortable?  Is David ok?  I took a breath and realized the following:  there were a LOT of people here to help this be a success...this ain't no little video for fun...this is THE REAL DEAL!  I told myself, "Judy, you better do this like nobody's business!  You better bring it!!  Don't f...k it up!! You can do this, but whatever they ask of you, do it!  Don't complain!!  Be happy - this is a good and blessed day!"  And then the stylist, Gio Alonso, brought over the first look "Shazzamity, Judy!!!"  LOL...can't even remember what it was...I was nervous! Brenda helped me get dressed, put on my shoes, and Javier and his assistant put on the final touches, and I was onto the set!  Ooh, this is exciting!

David walks over, takes my hand, and smiles:  "Okay, first time you're going to do it however you feel it. Then we'll do it again and give you direction." Whoo.  Scary.  So many people around, just staring...I felt like an exhibit in a zoo...and everyone was just waiting for me to do something amusing...lol.  There was that slate!!!  You know, the slate they use in movies to say, "take one!"  So cool!!  So freaking cool!!  I heard 4 beeps and the song began...here goes nothing! First take is over...everyone applauds...tremendous sense of relief.  I felt like if I could get through the first one, I'd be okay for the rest of the day!  We did a few more takes, and then we surprised the fans. 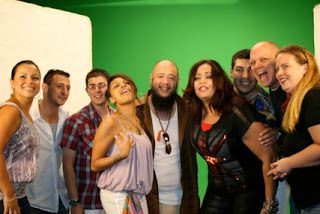 The fans who were invited were the ones who won the Stay Photo Contest:  Leslie, Angel, and John...I invited Lisa too (special raffle we held because we had room for one more).  We had Melissa purposely distract them so I could go behind the window and say hello when they least expected it!  "Hello my friends!!!"  We were all clapping, laughing and smiling!  I welcomed them, thanked them for coming & told them we would have lunch later on. We did take after take, look after look - I was in it for the long haul. I told myself,  "You keep going until you can't go no more, and then, even then, you keep going! " LOL   And then I was asked to do what I had feared:  I was asked to stand on a teeny, tiny crate..I'm talking I think the width of my body was larger than this crate.  The director stood on it, and lunged back with his back leg on another crate, and I thought, "Yea, okay, sure...I'm an olympic athlete! I can do that!" NOT!!!   I stood on that little crate, and did my best, but my balance or lack thereof got the best of me....again, not sure if it was ms related or just that I'm a bit of a clutz.  And finally after hours of being in 4 inch heels, my right foot simply couldn't stand it anymore.  I confessed, "I'm sorry guys, but my foot hurts so bad, that I know I can't give you any better...all I can think about is how bad my foot is hurting."  I felt so bad, but I knew it was true.  Why drag everyone, forcing myself to feel what I am not feeling, and end up wasting everyone's time...and money?  And then the director told me what I knew he would tell me, "Just one more time, Judy, and then we can break for lunch."  I did what I could.  I think Lunch was supposed to be at 12:00pm...it was 2:30pm when I was finally taking off my clothes and changing for lunch!  And then, one of the biggest, most honoring moments of my life happened! To be continued!
Posted by Judy Torres at 6:02 PM