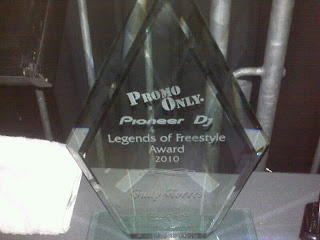 It was time to get ready. I felt the tears creeping up, but I just couldn't think about that. Oh, yea, and I was still worried about my car too. But there was an important show to be done at House of Blues. I'd be ont he same bill with Mike Posner, Kelly Rowland, Kaci Battaglia, Salt N Pepa and many more!

I outdid myself as best as I could. I took my time applying my makeup, doing my hair, putting on whatever I needed to suck it in, pull it up and stick it all out, lol.  Almost two hours later, I looked in the mirror. I felt good. I looked good - and the stranger (woman) in the elevator told me so, LOL.  I stepped out of the elevator and was escorted by my road manager to the VIP entrance.  There were cameras set up, kraft service.  I went to my dressing room that I was sharing with Chris Willis and Kaci.  I watched Kaci and her four dancers...just incredible looking girls with GREAT figures. Ugh. And just like that, in one instant, I felt like the ugly duckling. For every negative and insecure thought I had, I reminded myself that I am Judy Torres. The Puerto-Rican Cuban Wonder Woman who's been in this game for almost a quarter of a century!  It was hard. I won't lie. I was having an ugly moment.  I'm sure we all have that moment when we just feel ugly, less than...whatever.  I saw Joey Fattone of Nsync. He said hello to me!  He is a cool guy - REALLY!

So I'm backstage now with butterflies in my stomach. Saw Joey Fattone, Blake Lewis, Chris Willis Travis McCoy - all of them backstage.  These industry gatherings, although a lot of fun, can be stressful for me. An audience full of industry peers are quite different than the audience full of true fans. They can be...well, quiet. I was scared. I watched at least 3 other acts before me - all half-naked, doing splits; just very beautiful looking people.  The Insecurity Monster was laughing at me. Who do you think you are, Judy? I had a flashback of the day my manager addressed my weight. His voice, commenting on my weight echoed in my brain: "What are we going to do...finger circling around me...about this?"  I was worried about my voice, but I just felt blah about myself. I wanted to do good but I secretly wondered what they were REALLY thinking about me.  Just before I went on stage, my manager walked up to me.

"You okay?"
"Yeah!"
"Sure?"
"Yep."
How do I tell my manager I'm feeling insecure.  I watched my manager talking with Kaci, and I admit, um, how do I say it...okay okay! I admit I was a little jealous of the attention she was getting.  I felt like the "has-been" compared to her.  She's 24 years old, and I wished I had a manager like the one I have now when I was 24, lol. But I know God don't like ugly, so I keep my jealousy in check, and realize it's just that I'm scared of the future of my own career. Wait.  That's it! I'm scared of what the hell is going to happen to me...I'm wondering if it's ending right in front of my eyes, and I'm not even noticing it. It's like sand. I'm trying to grab it, but grain by grain it slips from my fingers and the tighter I hold on, the more sand falls.  So yes. That is is. I have found the words. I am afraid of my career ending.  My manager interrupts my epiphany.
"Judy just go out there and have fun. Just have fun."  That was weird - he never said that to me before.

Bartel of WKTU introduced me. It was a perfect introduction. "...I have the privilege of knowing her and working with her at KTU...Judy Torres!" I walked out & did my best to have fun.  It was like every half second I almost had a moment of doubt. I was fighting myself.  I couldn't really hear my music at all. Damn.  But I sang my heart out. When I introduced my new single, Stay, I told the story of why I recorded it and I told the industry that I hope they'll give the song a chance. And that is when I let go of my fear.  I think it went over well.  I ended with Faithfully, and the crowd was with me...finally.  As I was exiting the stage, Cary Vance from Promo Only announced that I am the first recipient of the Legends Award...they were recognizing me for mycontributions to the music industry for the past 25 years.  It was a Freestyle Legend Award.  I was so surprised...and so scared. I was ECSTATIC to receive the award among my music industry peers!  But I can't explain it, I was scared. It is the beginning of the end?

As I walked off, everyone congratulated me, and my manager gave me a look, and I knew instantly he knew about it before it was even handed to me. I did some press, took hundreds of pictures!  Joey Fattone congratulated me, one of the singers from Boyz to Men congratulated me too.  About two hours later, the chaos was finally over, and I had an apple martini. I dont drink often and when I do, I have one or two drinks...that's it.  It was a good apple martini...so I had another.  A few minutes later, I was offered a shot of Tequila. I accepted..but the shot was more like 2! LOL. Few minutes later, everything was just funny. I put on my chancletas (slippers) and laughed my butt off! I had to go to the bathroom.  I looked at that entrance door that was about 20 feet away from me.  And I questioned myself. Can I make it in a straight line?  Will I actually make it to the bathroom? I walked, I mean stumbled a bit over to the bathroom, walked in the stall, closed the door and laughed so hard! Yes! I was officially D-R-U-N-K! Not my prettiest hour, I assure you, but I was protected by my road manager who wasn't drinking at all and it was the end of the night anyway - everyone had left.  It was only the third time in my life I'd been drunk.  I KNOW you don't believe me, but true...until this evening, I'd only been drunk twice in my life; once on purpose and the other by accident. I've never been drunk to the point where I hugged the toilet bowl declaring I'd never drink again.  For me, this is where it got a bit scary:  I don't remember how I got to my room!! But I do remember laughing in my bed and I looked over and saw there was no one next to me, and I laughed some more...when sober, I usually cry at that moment.  But who is this strange woman laughing? Oh, yea, that's right...it's me.

"BAM, BAM, BAM!!" What the hell is that?  "BAM, BAM, BAM!!" Oh, yes, it was my head!!
I woke up at 9am...had gone to bed about 4am.  The headache woke up me up...It yelled, "Get up!!! NOW!" Ooh, that hurt.  I went to the bathroom.  Raccoon eyes.  Hair stuck to one side of my head.  One earring on...no wonder I'm still single! I wouldn't marry that vision either, lol. But wait...there's more. I'm gonna tell you because it's a blog..and I am sworn to the truth here...please don't think any less of me, lol...where was my top? Where are my shoes? I looked all around to find them, suddenly scared.  Did I DO something that I should not have done? Oh, my God!! I had heard tales before, but I never believed them until this very moment. It's true.  For the life of me, I don't remember taking my clothes off...AAAHHH!!  George Carlin, the late and great comedian, has a whole skit about an imaginary place where things go when you lose them...I wondered for a second if such a place existed because I CAN'T FIND MY TOP!!  I began throwing things everywhere...did I do a strip tease for myself?  Where is my Top!! Oh, come on now!  I admitted defeat, and decided a shower would help me wake up to find it. I swished the shower curtain open..and there it was:  my shoes and top...on the bathtub floor.  Whew!  That was close!  And thus, my friends, I shall NEVER drink like that again!!

One could argue that I was stressed...I had a car accident the night before, then my beloved kitten died, and I was questioning myself and the future of my career.  One could argue that I was in a state of mild panic, sadness and needed comfort.  Anyone could get drunk right?  Well, not Judy Torres...I simply am very responsible.  In fact, my freestyle artist friends all make fun of me that I'm the prude of the group.  but I did it...I got drunk.  And you now know the truth about me:
Sometimes
I am insecure
Sometimes
I am scared and here's the deep part:
I
Am
SO
HUMAN!

I live in an industry that helps people fantasize. For a while, as an artist your job is take the stress away from people, to help them believe in dreams, in the perfection of beauty.  In this industry, perfection is expected. While you are on stage, you are not allowed to be sick; you are unable to bring your problems to the stage; you have to leave your worries behind...and I LOVE doing that for the people because it makes me feel good to know I help others feel good.  But sometimes, well this night, I could not keep up. I tripped on my own fear, stumbled over a car accident, slipped on missing my little kitten and fell on a big pile of insecurity poop. But a person's character is not defined by how many times  one falls, it is defined by how many times they get up.  I'm up...I'm standing...I am still here!!