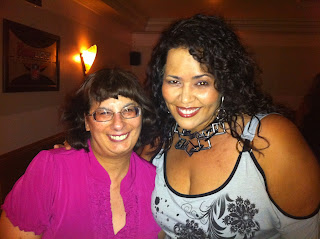 It was Saturday, July 17th (you can see I'm like SOOO behind, lol).  Once again, there was lots to do, but for someone else, not for me: for a very devoted fan, Leslie Guttenplan.  Leslie, like other fans, is so loyal and dedicated.  She was so excited about this show at Stone Tavern, in Queens, NY, that she was even instructing other fans on my Facebook page how to get there; giving them a countdown too! LOL. She's even a follower on this blog (yes, Leslie, I see you)!!

So I had just ordered new publicity photos, and they'd just arrived. I signed one for her, framed it.  Then I went to the florist and bought a dozen red and yellow roses.  I purchased a gift bag, and included a signed new cd of Stay with a postcard thanking her.  Got a manicure, pedicure and once again wondered what the hell I was going to wear that night.  A harmless trip to Rainbow answered half of that question, lol. Yes, I go to Rainbow sometimes too - ...I call those trips "keeping it real!"

The limo picked us up - my road manager, my best friends and me...we were filming some behind the scenes footage, and had a great laugh over the differences of points of view between my road manager, David, and me.  We were in horrible traffic, but time spent with friends flies each and every time.  Just as the limo approached the entrance, my friend said to me, "Hey, Judy, look who's outside."  I couldn't see through the tinted window. I squinted, I pressed my face up against the window, but to no avail.  The director for the video of Stay had arranged a surprise for me.  Stepping out of the limo...oh...oh...wow!!!  It was Mystique Guy!! Damn, do I have enough lipstick on??? I maintained exposure, but inside I was freaking out!!

We were escorted upstairs to the VIP area, and I was immediately suffocated by the cigarettes (which is the WORST thing for your voice) and almost smothered by the people there-a good and sometimes overwhelming experience.  As quick as I arrived, I was taking pictures and more pictures and more pictures.  I saw Leslie there - great, I thought, she made it!  I said hello to her and promised to speak with her after the show. I was afraid the whole time that she would see my giftt for her.  I sat down and wondered...okay, how do I begin speaking with Mystique Guy?  He's just too cute...very well-spoken - I don't know...he gets me a little twisted. Actually, now that I think about it...he looks a little like Navy Guy!  Revelation - revelation! Duh. LOL.

On stage, before singing Stay for the first time, I told the audience how great Leslie has been, what a great fan she is, and how she promoted the show like crazy, etc.  I asked her to come up, and gave her the gift.  Her smile was worth it all and SO much more! The show was great - the audience was great! And singing Stay for the first time was a little nerve-wrecking...how do I sing this song that's not quite a happy song, show the sad and distresssing emotions she goes through - all to a happy beat?  I did the best I could, and went upstairs and signed ALL the pictures Leslie had brought from her collection - she had a lot! It was all good. I wondered what Mystique Guy thought.  Ready for this?  He had never heard of me before! Another one! He seemed to have enjoyed the show...I hope he did.

Funny thing...while in the VIP, there was a man with a white hat on.  HOT! I know, I know, my friends, you're probably saying calm down, girlfriend! It's outrageous - I feel like a shark in the water.  Is it my hormones? Is it that it's been a long time since I've had a boyfriend?  Is it that I'm human and I'm just giving voice to what people refuse to admit? Hm. Anyway, this guy with the white hat was eyeing me, I was eyeing him.  The glances were exchanged on and off - for a moment I thought about saying hello...but I am always the one to break the ice, and it's resulted in picking thewrong man over and over again. And I should mention,  he looked somewhat of a bad boy...but looks mean nothing, and I've learned that a long time ago.

Leaving Stone Tavern, Mystique Guy and I exchanged numbers, but honestly I don't think he's attracted to me in that way at all.  I was a happy woman though & explained to him that he gave a great audition and he was our first pick - until Best Guy walked into the room.  He was VERY gracious and proved to be a good guy. I said goodbye and we got in the limo.  As the door was closing, I looked out - the man with the white hat was outside - he was looking directly at me in the limo.  The phrase "looking at me hard" came to mind.  I thought to myself, "Come on, dude, just say something.." But he remained silent...and so did I.   It was a goodnight...for me, for Leszlie, for my friends, for Mystique Guy (who traveled 2 1/2 hours to see the show) and for the audience!!   It was a good, good surprise!!